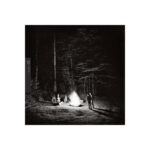 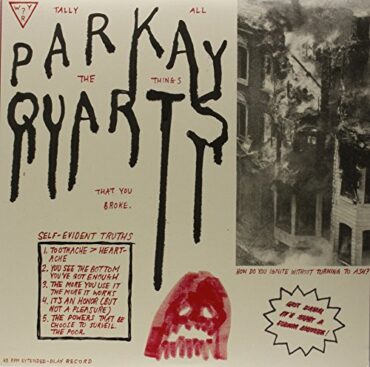 PARQUET COURTS - TALLY ALL THE THINGS THAT YOU BROKE $13.00

While holed up in a house in upstate NY, The Men took full advantage of their rural surroundings, in-house studio, and lack of recording timelines and obligations. They tracked over twenty-five songs. On top of that they also managed to record five songs acoustically, while sitting around a campfire outside the house. Campfire Songs is the band’s second release this year, and their fifth in the past four years. To say this band is prolific is an understatement; they are teeming, borderline prodigal even. Two of these acoustic jams are alternate takes from the album, “I Saw Her Face” and “The Seeds”. The plugged-in version of “Water Babies” appeared on the b-side of their 7″ from January, “Patience” and “Turn Your Color” are two entirely new beautiful tracks that highlight this band’s ability to be as gentle as they are commanding.

The Men spend so much time on the road that they don’t really “get out much.” In our Guest List from earlier this year, I was struck by how few hobbies they have outside of their music, and beyond that, they’re most excited by current bands they work with directly. Not to mention their preferred cultural touchstones are from at least several decades prior—when they say a VHS copy of Uncle Buck has been a tour van favorite, you really believe them. Which is how a shitkicking, raucous indie band shares an album title with a Twilight movie in 2013—it’s likely they just aren’t even aware of its existence. On a much smaller level of ubiquity is “Campfire Songs”—it’s a title associated with Animal Collective’s porchfront, improvisatory EP from 2003, their last release as a band that was still considered too weird for mass consumption. They might not be aware of that either, but the Men are nothing if not charmingly literal: Campfire Songs is a collection of five songs recorded around a campfire during their Big Indian sessions for New Moon in Upstate New York.

But the very thing that makes Campfire Songs a logical follow-up also makes it kinda unnecessary. Two of the five songs here are taken from New Moon and they’re amongst the most indicative of how their interests have shifted towards Crazy Horse and classic southern rock more than any of Neil Young’s indie rock descendents. On New Moon, “I Saw Her Face” and “The Seeds” made full use of the Men’s tripartite guitar attack and were played ragged and loud. Yet, removing the drums and swapping out for acoustic guitars does little to change the character of each, particularly in light of the muffled, dank recording of Campfire Songs—this is the Men unplugged, but not Unplugged. Whether or not someone might prefer these versions, they’ll do little to make you think of them differently. The same goes for “Water Babies”, a solid dirge which simply sounds like the New Moon B-side that it is rather than something that was clearly inspired by Campfire Songs’ holistic format.

If you’re looking to this EP for insight into the Men’s progression as a band, it’s best to think of Campfire Songs as a live performance, or at least chronologically structured. In the last 10 minutes, the Men loosen up and realize that the intended audience for these performances is themselves. And that’s where things get interesting. After a couple of wide angle turns on Open Your Heart and New Moon, in a strange way, the final two new tracks on Campfire Songs take the Men back to their origins. “Patience” and “Turn Your Color” are, for a lack of a better word, jam sessions—loosely structured, if structured at all, guided by audible count-offs, filled with stumbled strums, and lasting nearly six minutes each. They’re not entirely au naturel, with tamboura-like drones and backmasked reverb effects being added after the fact. But the combination of the gothic anti-production and detuned acoustic guitars ensure that “Patience” and “Turn Your Color” are as heavy and unpredictable as much of Leave Home even without the abrasion and distortion; previously, the Men made beauty sound like an unintended byproduct of pain, whereas Campfire Songs treats it as a proper artistic goal.

Despite its quick turnaround time, the Men actually are allowing listeners to catch up on Campfire Songs. Typically, the Men’s albums are endpoints and if you catch them live, they’re workshopping the next record and it’ll probably be out within the year. It’s a band whose artistic arc is in hyperdrive—the restorative nature retreat usually happens once an artist bottoms out at least a decade into their career. On the contrary, to paraphrase New Moon’s “Half Angel Half Light”, the Men are a rock band on a roll, but as with Woods, Ty Segall, and Thee Oh Sees, prolific and consistent bands run the risk of being taken for granted after making the inevitable leap from lo-fi. It’s not an essential release in the Men’s rapidly growing discography, but as a rare snapshot of a band constantly in motion, Campfire Songs is sensible at least.